Skip to content
I tried to write about that for nearly a year now. I wanted to create a good report about what I did to recreate the Gose from Goslar for Carnival Brettanomyces. Now nearly a year after it here the first part of my report.
Many homebrewers and even some upcoming professional brewers have a pretty naive attitude. I am no exception in this. I thought well I go to Goslar and capture some wild yeast and it will work out fine. So I prepared some wort in six mason jars and six tubes, lowered the pH to 4.3 and went up to Goslar. 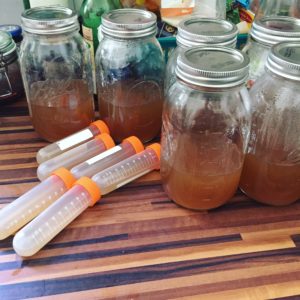 I placed the jars near the river Gose and left them open over night. As protection against flies or insects I was using was a nylon mesh. 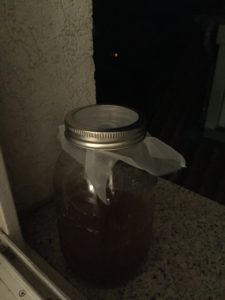 When I went to collect them the next day some of those mason jars where pretty attacked by bigger inhabitants of the forest. Next time I think I would try to remedy that with some metal mesh or something like this. I also took some fruit, wood and flower samples and put them into the tubes. After listening to a video called „Where do the wild yeast roam“ about how a lot more yeast live in oak leaf litter I want to do capture some yeast from there in the near future.
After coming home I was letting it start to ferment and selected by smell. This was the part that was pretty disappointing, only one of the six mason jars smelled somewhat good and was fermenting. And only one of the six tubes was actively fermenting. Next time I would use way more tubes and samples in order to increase the chance to get a stellar sample. Also I had problems with a lot of them growing some mold. One was producing such a god awful smell it didn’t even go away after putting the thing into the dishwasher. I had to soak it overnight with some PBW to get the smell away. I was really lucky that two captures smelled quite good and estery, so I went forward and used them.
I shared my culture after I used it in my recreation of the Gose form Goslar with fellow homebrewers that attended Carnival Brettanomyces. Keith and Richard (from Escarpment Labs) already used them in a Gose they brewed. I really need to to more yeast capturing!
Here is a picture from my culture that Richard plated:
Next time I would also add 2 % of alcohol and some higher hopping in order to decrease bacterial growth. Next round I will be better prepared. So here are my tips for capturing wild yeast:
– Try to prepare a lot of samples and not only 6
– Use a lot of precautions in order to get the right yeast and bacteria
– Lower the pH to 4-4.5
– Add 2-3 % Alcohol by Volume
– Add enough Hops for 20 IBUs to favour yeast
– Bonus: Do some dilution streaks with your captures to purify the yeast isolate